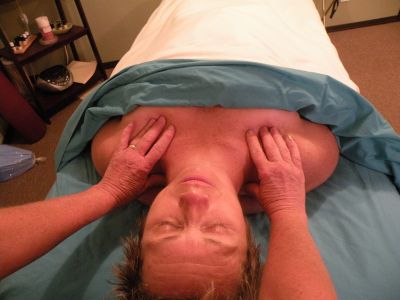 How My Technique Came About

As a massage therapist I would often feel what I called "peas" (nodules) in the muscles. These were very tight bands, but I didn't know what those knots were so I took a class in Kinesiology (muscle balancing) to add to my massage modalities.  During the class I could feel where the points were and I would work to release that area.

When I would really tune into a client's body I could feel there were also other points on the body calling out to me to be released. The class for Kinesiology did not specifically address my questions about those tight "pea" (nodules) knots, but I did learn other useful tools to integrate into my massage practice.

Often, while working on clients I would be drawn to work on a specific area (not knowing this was a trigger point, had to research to find out what I was feeling and what the client was feeling). With certain techniques (pin and stretching) the muscle would release in that area and the client would tell me what they were feeling with the release and where they felt other actions from that release (referred pain). I could feel the body sigh with relief.

Both my clients and I started noticing an improvement in the areas my hands had been drawn to. I have clients that had been dealing with pain and stiffness for years with no help from traditional medicine, physical therapy and other types of massage (I’m not discrediting other massage techniques), but with regular use of this technique they were finding increasing relief.

I continued to add this technique into my massages and that is where Core Unwinding started to become evident. While working on clients, with what I finally realized were Trigger Point issues, I could feel that the core muscles were tight. This feeling was integrated into my own body during those treatments. I can only describe it as a tight winding up, like we used to do to a swing when we were kids. As the muscles would unwind it felt as if we had let go of that twisted swing and it was unwinding back to its original position. I could literally feel this happening in my own body as it was happening to the client’s muscles.

I always start my clients with a nice smell of Bergamot and or Lavender essential oils: I place a few drops in my hands and hold my hands above their nose and ask them to take two deep breaths in, then I wipe the remaining oil onto their clavicle and shoulders.

I then start my work at the client’s head so I can get in tune with my client’s energy and the body starts to talk to me. What I mean by that is that I start feeling my client's issue in my own body. I work with my eyes closed to because this allows me to be more in tuned with the client’s body and need.

It is important to get the Trigger Point to release and then allow a light stretch of the affected body part, I would often be working on the neck and it would just start to unwind. I work with my eyes closed and would be holding onto the Points and then I would feel how the muscle wanted to unwind. The head would start to roll from side to side and then the neck would stretch without any input from me. The rolling and stretching would allow the core muscle group to unwind and return to its normal state. It was amazing to experience and feel how the body knew what to do to get the relief that it needed once the correct spot had been activated.

When this first happened I tried to stop the neck from unwinding and I could not. I tried to make the neck move in a different direction but the client's body would not let me. I then knew that the body was in charge and it knew what it needed to do. With more experience I realized that I was aware when that part of the body was finished unwinding and was signaling that I could move on to working on others areas.

I started teaching my clients how to find and treat their own Trigger Points with just the use of their own hands to find the tight band of muscles. Then using their fingers or by placing a tennis ball on the area with a Trigger Point and applying light pressure they can release that trigger point. They will feel the trigger point area shift 3 times and then that area will relax. This technique can be applied to as many areas as necessary.

Some client’s initially have control issues, which prevent their body from relaxing enough for the body to unwind on its own. If that is the case I continue to relax the area with medium touch massage.

After the body has received the Core Unwinding session the body recognizes how it feels when the muscles are back in their intended alignment or position. When the Trigger Points are released in subsequent sessions the body takes over control and will unwind on its own. The body seeks to find its natural state to maintain optimal wellness and function.  The area of the body that has just received the Core unwinding will feel light.